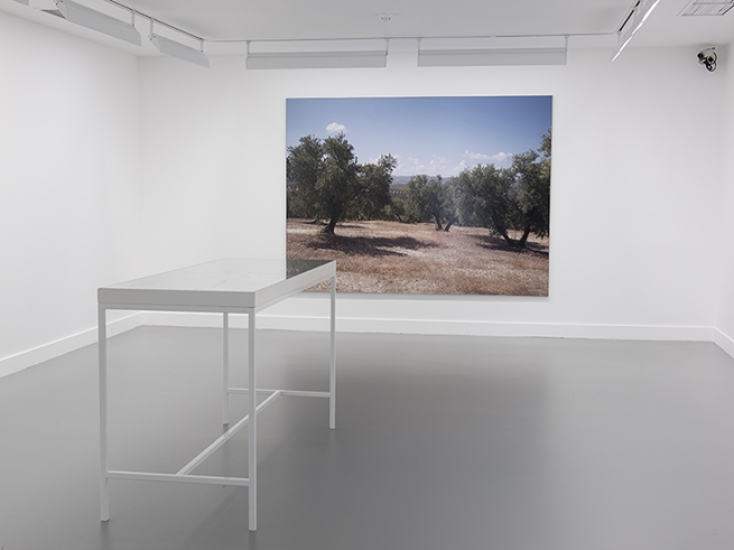 CONTROVERSY (2017)
In collaboration with Sam Weerdmeester

Controversy addresses the polemic of photojournalisms’ ethical credibility by engaging in the discussion surrounding Robert Capa’s 'Falling Soldier' and confronting it with a scientific approach. Capa took his iconic photograph during the Spanish Civil War in 1936, capturing the very moment a soldier is shot in the head, making it one of the first images of war in action. The authenticity of this image has been questioned since its creation, although the story that accompanies it is simply too compelling to not be believed.
A recent study by professor José Manuel Susperregui, based on orographic analysis, indicates that this photograph was made elsewhere than originally claimed. This would place Capa far from the front lines, making it unlikely that the soldiers he was accompanying met any resistance, thus arguing that the photograph was staged.
Controversy is a registration of this newly defined location. A photomontage produced with scanning technology that is normally applied to the reproduction of paintings and rendered in an unusually high resolution with no interpolation. This approach paraphrases the empirical methodology of drawing conclusions from a vast amount of collected data. However, when applied to a landscape, details of moving grass and leaves while scanning sometimes lose their shape, refracting into small intensely coloured instants of a pictorial madness.
Does a scientific debunking of a photographic icon ultimately change its meaning, or does its relevance surpass its authenticity? Controversy poses an aesthetic answer to this question.

Controversy was photographed while artists in residence at arteventura, Spain, June 2016. Max Pinckers is affiliated as a researcher to KASK / School of Arts of University College Ghent. Controversy was part of his research project that was financed by the Arts Research Fund of University College Ghent and Mondriaan Fonds. The catalogue was produced on the occasion of the exhibition Controversy at M HKA - Museum of Contemporary Art Antwerp, August 2017. Permanent Collection, Fotomuseum FOMU, Antwerp.
Reference texts & reviews:
Lars Kwakkenbos, Controversy, Belgium, 2017
Hans Durrer, Controversy, Belgium, 2017
Controversy, published by Lyre Press, 2017